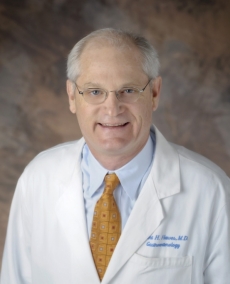 Robert Hawes received his M.D degree from Indiana University School of Medicine in 1980. He remained at Indiana University and completed his Internal Medicine training in 1983 and his Gastroenterology training in 1985. Dr Hawes is board certified in Internal Medicine and Gastroenterology. Dr. Hawes traveled to London, England in 1985-1986 to receive training in ERCP and advanced endoscopic procedures. In 1987, Dr. Hawes started the Endoscopic Ultrasound (EUS) program at IU which was the 3rd program of its kind in the US. Dr. Hawes was on faculty at Indiana University for 8 years (1986 - 1994) before moving to the Medical University if South Carolina (MUSC). During his tenure at MUSC, he served as President of the American Society for Gastrointestinal Endoscopy (2005 - 2006) and was awarded the Peter B. Cotton Chair for Endoscopic Innovation which he held until leaving MUSC (2006 - 2012). In 2012, Dr Hawes moved to AdventHealth Orlando to help form the Center for Interventional Endoscopy. This is now a 5 member group whose practice is confined to referrals for complex endoscopic procedures. In 2015, Dr. Hawes was awarded the Rudolf V Schindler Award- the top honor given by the ASGE. In 2018, he was given the James L. Borland, Sr. Memorial Award from the Florida Gastroenterologic Society.

Gastroenterology: American Board of Internal Medicine

Note:- The list below is for reference purposes only and is subject to change. Please check with your health plan to confirm that Robert Hawes, MD is included before scheduling an appointment.